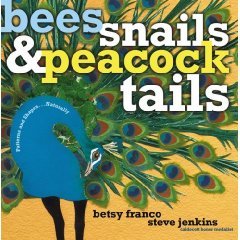 "The duo behind Birdsongs (2007) teams up again in this winning introduction to the patterns and shapes found in the natural world. From the dazzling eyes of the male peacock’s feathers to the hexagonal chambers of the bee’s hive, Franco’s spirited poems explore the many forms and functions of nature’s geometry." starred review Booklist

"This inviting book is bound to spark more careful observation of the shapes and colors in the reader's natural world." starred review Publisher's Weekly

The animal known as the puffer fish
does not want to be someone's gourmet dish.
Whenever it senses there's something to fear,
it puffs itself up till it's almost a sphere.

Study a beehive
and you will see
the mathematical genius of the bee.

This math is passed
mysteriously
from worker bee
to worker bee!